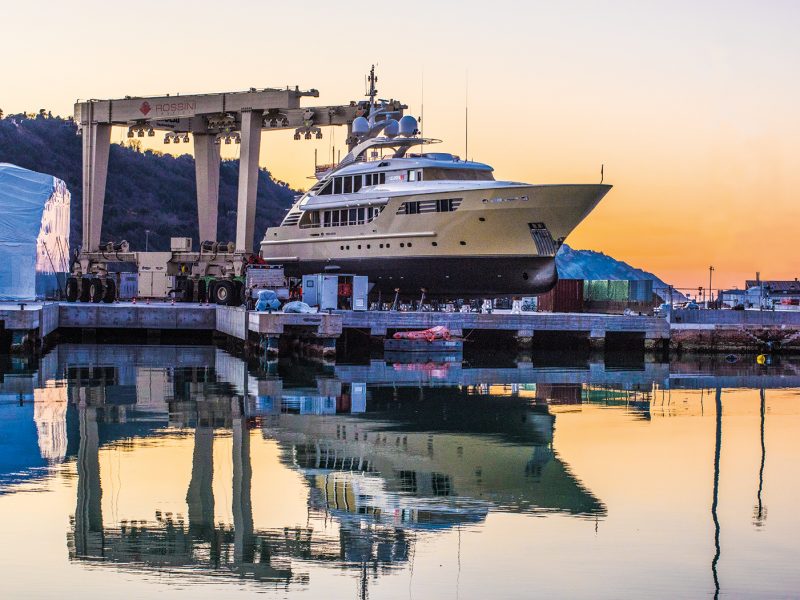 Around four years ago, a group of foreign investors bought the Cantiere Navale di Pesaro with the aim of relaunching it as an impressive, cutting-edge refitting yard

THE FIRST THING THAT WAS DONE AFTER THE PURCHASE WAS TO CHANGE ITS NAME TO CANTIERE ROSSINI, in homage to Pesaro where the celebrated composer Gioacchino Rossini was born in 1792, becoming an icon for the city, which has been included in the exclusive list of UNESCO Cities of Music because of its classical music and theatre.

«Because of my extensive experience in the commercial yachting and shipping sector I was asked to become the CEO of Lisa Group, the holding company that bought Cantiere di Pesaro to turn it into a luxury refitting yard», says Stewart Parvin.

«We looked at many different options before choosing the Cantiere Navale di Pesaro as the perfect place to carry out our project. As the captain of large yachts, I was aware of the essential requirements needed in any yard we wanted to buy. First off, the harbour had to be well protected in all weather conditions. We wanted to take over a yard that didn’t have any suits pending with ex-employees; it was vital to have a large area available for new buildings, a courtyard, hangars and offices. There had to be a network of companies in the area that were able to provide high-level yachting services; and it had to be situated in an area with a standard that met the requirements of owners and crews», continues Parvin, who doesn’t hide his enthusiasm for the yard. 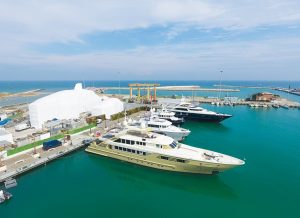 The yard offers every kind of service, from routine maintenance to the most complicated refits.

«The Cantiere Navale di Pesaro had all of these characteristics. The interior of the harbour at Pesaro is highly protected by the sea walls that block swell coming from any direction; its size means that new hangars, warehouses and offices can be built, and there is also a very substantial external area for large yachts that are being worked on; the yard had been closed for years, and so we didn’t inherit any negative baggage, and we could start from zero as far as employees were concerned; the Pesaro and Fano area has got a lot of small, medium and large companies that can provide high-level services, and specialist yachting technicians. Pesaro is a delightful spa town with an excellent choice of hotels, restaurants and other places to go out, which meet the expectations of the kind of clientele that surrounds the world of luxury yachting; the city centre can be reached on foot from our yard in just ten minutes. We hope that the yard will help to encourage the redevelopment of the harbour area and that it brings a positive impact to the city». 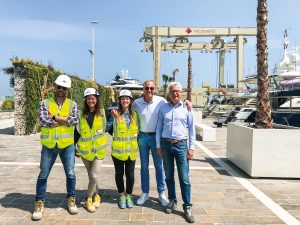 In the pictures: Stewart Parwin, CEO of Lisa Group, and Alfonso Postorino, Director at Cantiere Rossini.

The ambitious project is taking shape fast. After the demolition of the existing buildings, which were in a very run-down state, a well-equipped and elegant quay measuring a full 120 metres has been built, with porphyry flooring, palm trees and a lush, ‘L-shaped’ vertical garden that separates the mooring area from the forecourt where the work is done. The final look is that of a small luxury marina,where a yacht can be moored in complete privacy.

The quay is equipped with a lowered walkway, that hides tubes and cabling. This has made it possible to install electricity, water and compressed air units in a position that doesn’t interfere with movementon the quay. There are also containers to collect sewage and grey water that are then passed into a holding tank before being treated. The quay has twelve moorings for yachts of up to 55 metres.

At the same time as the quays were built, piers were constructed to move a 560-tonne travel lift. The lift, which was specially built for Cantiere Rossini by Cimolai, is fitted with some unusual accessories, such as a 22kW diesel generator that prevents on-board blackouts when boats are being launched or hauled out.

The courtyard, which covers 15,000 square metres, is equipped with pop-up columns to supply electricity, water and compressed air. Each yacht being worked on in the forecourt can be connected to the sewage collection container that runs beneath the ground. 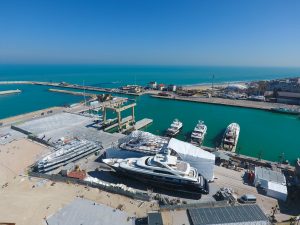 Painting will be done inside two of the air-conditioned hangars currently being built. Each hangar is 28 metres high by 22 metres wide and 70 metres long so that the travel lift can bring a 50-metre yacht into it, with radar and antennae included. The whole operation, from hauling out to parking,takes less than two hours.

The hangers will not be the usual cement rectangular boxes, but rather two convex structures that look a bit like two enormous overturned hulls. The hangars, the new offices and what will become the “crew village” are equipped with a gym, a swimming pool, a wellness centre and socialising areas, and feature contemporary, refined and attractive architecture. Once the work is finished, Cantiere Rossini won’t be just a simple yard facility, but a real luxury yacht hub with high standards both in terms of the service provided and the architectural beauty. «Our commitment is to build an ‘industrial’ site that is as beautiful as a historic town, a yard that, as well as providing jobs, contributes to redeveloping Pesaro’s entire harbour area», says Alfonso Postorino, the yard director.

To overcome the limits imposed by the size of the harbour at Pesaro, Cantiere Rossini has signed an agreement with Rosetti Marino Group to use a dock of 180 x 27 metres and a 175-metre quay with large warehouses and offices inside a sheltered area inside Ravenna harbour.

This important agreement means that Cantiere Rossini will be able to accept yachts without any limit on size. Working alongside Alfonso Postorino, who heads up the yard, is an international team of experts who are all keen to provide the best possible service to the most demanding clientele.