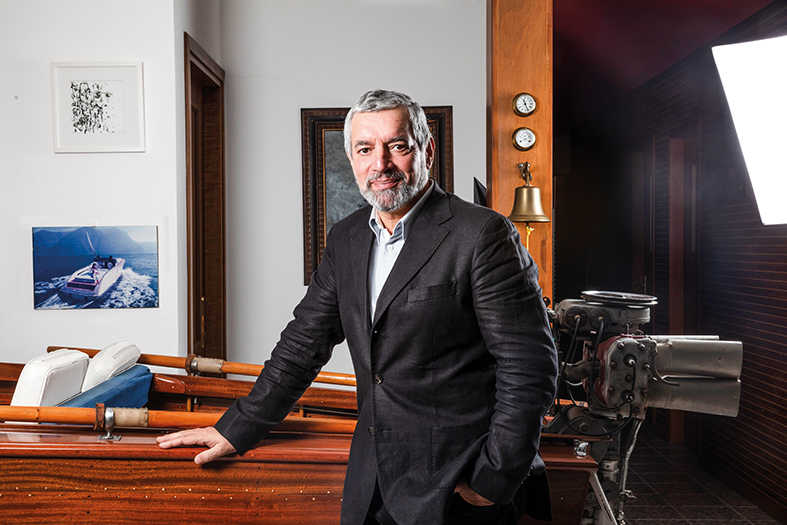 Cantiere Nautico Feltrinelli has a long story to tell, which goes back well over 100 years

WHEN TELLING A STORY, YOU NEED TO KNOW WHERE TO BEGIN. When I enter the shipyard’s headquarters in Gargnano, Mauro Feltrinelli is waiting for me. I’ve known him for some time, and I’m also well acquainted with his work. The site is celebrating its centenary this year, but the business goes back much further.

«The history I’ve managed to piece together», he recounts, «begins in the seventeenth century. The first documents on my ancestors go back to that era. Pietro Feltrinelli, born in Gargnano in 1639, son of a certain Antonio Feltrinelli. A boat builder by profession».In the mid-1600s the Feltrinellis made passenger or fishing boats, as well as twenty-metre-long boats to transport goods from one side of the lake to the other. 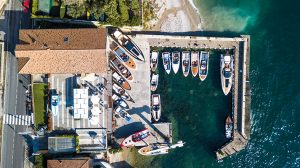 All earlier documents regarding Mauro Feltrinelli’s ancestors have been lost or destroyed – the result of the plague, which claimed many victims in the Garda region, and across the whole of Europe. The registers of births for the parish, which at the time acted as a sort of register office, were burnt out of fear that they could transmit the illness.

«There is a story, passed down orally in my family, which takes us even further back. It’s a story I heard told both by my father, and by my grandfather when I was a child. In 1467 a war was being fought in Garda, between the League of Mantua, allied with the Austrians, and the Republic of Venice. The Venetians decided to transport their warships to Riva del Garda, instead of building them on site, in what was a brilliant and extremely challenging military operation. They sailed along the river Adige, then used oxen to transport the boats to Riva del Garda, where they were launched, to counter the Austrian advance. One of the ships was moored in the port of Gargnano. In the same period, a fellow named Gioacchino da Feltre, a caulker by trade, appeared in the town, and was involved in maintaining the ship’s timber. He settled on the shore of Lake Garda, and, most likely, his children were called ‘feltrini’ in the local dialect. And it’s not a big leap from that to Feltrinelli».

Traces of this explanation of the family’s origins can also be found in some books published by the Feltrinelli publishing house. Giangiacomo Feltrinelli, the publisher, belongs to another branch of the family, but their origins are the same. «All the Feltrinellis came from Gargnano. And they all had something to do with wood». 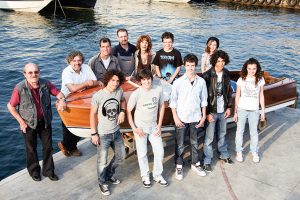 It’s an inescapable destiny. If your name is Feltrinelli, it means you come from Gargnano and you’ll end up working with wood. The shipyard produced boats uninterruptedly until the 1960s. It specialised in motor boats, both for racing and for pleasure.

The whole familyhad a passion for racing, and so they were the first to benefit from the shipyard’s work. But they weren’t the only ones. Many famous people went through the company’s doors to commission speedy motorboats, including Edmondo Turci, one of the captains of Gabriele D’Annunzio’s MAS boats, who was involved in the Bakar raid. He was a keen motorboat helmsman, and Feltrinelli craft were his boats of choice. 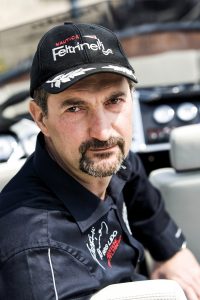 D’Annunzio’s MAS was actually restored by the Feltrinellis – it was they who turned it from a boat of warinto a pleasure craft. Other clients of the shipyard included the actress Eleonora Rossi Drago and racing driver Tazio Nuvolari, with his nephew Luigi. «I was born in 1964», Mauro Feltrinelli recounts, «and my father took over the business that same year.My family have always made fun of me, saying that when he realised how much I was eating, he decided it was time to turn to something more profitable».

In the mid-1960s, the space the shipyard used for construction was given over to storage. And the Feltrinellis were pioneers in this field too. Garda, unlike other lakes in northern Italy, does not have many natural sheltered harbours. And so as far back as the 1930s they created the slipway for hauling and launching boats, and invented what is today an extremely widespread service both on lakes and at sea: indoor storage. Another activity that has continued unabated is technical support, for both engines and hulls.

«When I was a child, on Saturday afternoons I didn’t go to play football with all my friends». In fact, the three brothers, Mauro, Dino and Sergio, who in 2015 left the family company to start his own career as a naval expert, used to go to the yard with their father, uncle, and grandfather.

«We were welcomed with a smile and a tin of tomato sauce. However, the tin didn’t contain tomatoes, but all the old screws, which we had to take out and sort: screws of different diameters and lengths, with flat or countersunk heads, and made of brass or nickel-plated. We spent hours sorting them all out. Then, in the evening, if we had done a good job, the reward was the privilege of hammering the nails into the wood. It goes without saying that these were re-straightened nails, not new ones». 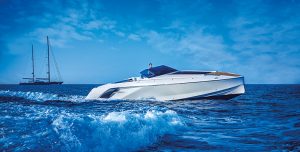 More than Mauro’s appetite, it must have been the advent of fibreglass that convinced his father to focus entirely on storage, support and sales, work that still continues today, in some cases with ‘historic’ clients. These are clients that are already in their second generation, sons that inherited boats from their fathers and, like them, continue to turn to Cantiere Nautico Feltrinelli.

They started building boats again in the early 2000s, albeit indirectly. «When we began working with Frauscher, their creations were mostly motorboats for lakes, maybe with electric engines, and certainly not racing boats. The first time they came here to Gargnano to test the 757 Saint Tropezwith two 260 hp V8s, the boat reached 27 knots. To them it seemed like it was flying, but we started laughing and said there was something wrong, because that sort of hull and those engines should get up to 40 knots. We got to work, made a few changes and shifted the weight, and got up to 35. Then the following year, with a new mould and the same engines, we reached the fateful 40 knots». 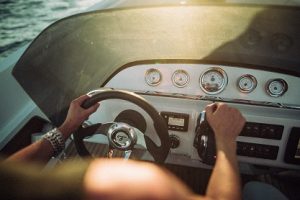 The racing DNA of the Feltrinelli family helped to establish a relationship of trust and collaboration. It’s an inescapable destiny. And the future generations are aware of this too. «My brother Dino is the engineering soul of the company, and his son Diego is already well on the way. My children are still studying, but the hope is that sooner or later they will take my place».

This is the way it has always been. Mauro too took over from his father at a certain point. «It happened suddenly. I was already working at the shipyard, and a German client, who lived in an apartment owned by our family, wanted to pay his rent in the form of some electrical appliances. As well as a television, he also had a fax machine – a 125V Panasonic, one of those American models with a transformer. I went to my father and told him that I needed it to send quotes to clients more quickly, without having to rely on the post. My father disagreed, and said it was either him or the fax machine. Shortly afterwards I took his place in the office».

Data Room
Cantiere Nautico Feltrinelli moved to its current location in 1919, exactly 100 years ago – the same dock and the same sheds, just north of Gargnano. The family has built boats since the mid-17th century, and perhaps even as far back as two centuries earlier. It has offered indoor storage since the 1930s, and between 1920 and the 1950s it had a lot of success building motorboats for both racing and pleasure trips.

The office still contains the old letter book used for storing invoices, quotes and all correspondence with clients and suppliers. Flicking through these documents reveals, for example, that a twelve-metre motorboat once cost 17,000 lira and that the shipyard could build it in just 30 days from receiving the order. Another letter, meanwhile, dated 18 November 1931 and signed by Egidio Feltrinelli, addressed to FIAT in Turin, asks what discount FIAT would apply if the shipyard ordered two, four or six 25 hp engines for use in water. The most loyal storage client is an Austrian man, the owner of a Coronet 21, who arrived in Gargnano with his boat in 1967. He, and now his son, have used the services of the Feltrinelli shipyard for 52 years.