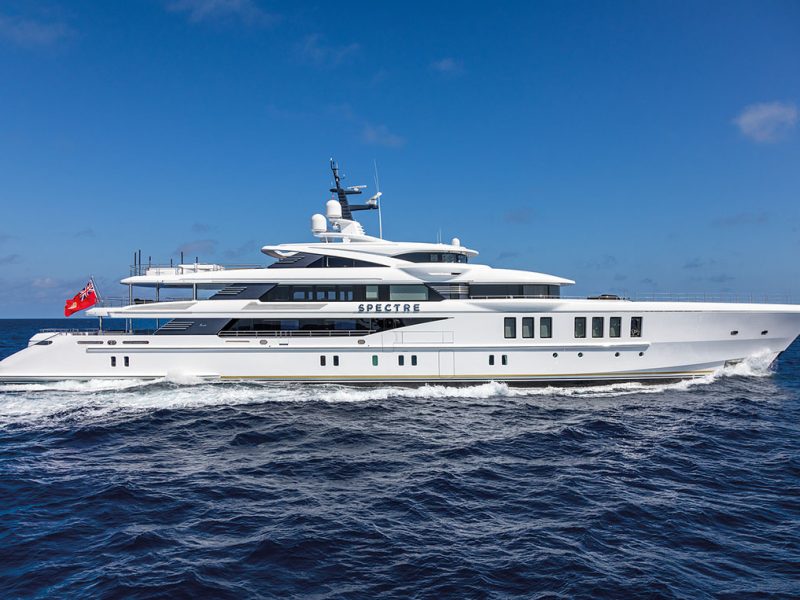 Benetti Spectre is a superyacht that stands out from the rest as a result of her unique contents. 69.3 metres long and 11.7 metres wide, this vessel has a draught of 3.2 meters and a displacement of 1,000 tonnes. With two MTU engines of 2580 kWeach, this hull can reach a maximum speed of 21.2 knots

A STAR IS BORN.The firmament of the sea is made up of planets, satellites, constellations and meteors. But Benetti Spectre, 69 metres long and with a top speed exceeding 40 km/h, shines on her own in the megayacht galaxy, attracting new generations of boats and owners into her orbit. Tales of men, yachts and shipyards. Stories of new records and cutting-edge technologies, combined with perfect balance and elegance.

In economic terms, meanwhile, Spectreis ‘full custom’, in the sense that she is unique from the tip of the bow to the final quarter at the stern – Benetti put in 750,000 hours of work to successfully complete a challenge that no one in the world had ever attempted before. Creating a boat that combines power, mechanics and design, and equalling and surpassing the limits for each of these key components, was a gargantuan task. 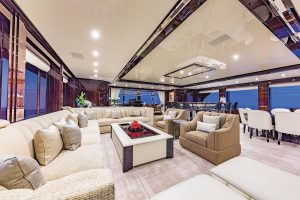 And, with the name that evokes the most recent James Bond adventure, Spectre also required a host of other characteristics, not least speed. The entire design is focused on the lightness of the craft, beginning with the windows, made from the highest quality materials, which allowed the thickness to be reduced by 30%, meaning less weight. The same applies for the sound insulation, and even the enormous diameter of the propeller shaft was reduced as much as possible.

The four or five knots of extra pace she has compared to other yachts of the same dimensions also stems from the hull, by Mulder Design, which is less rounded than normal displacement hulls, and therefore produces less resistance in the water.

«We used a large, classic boat as a template, and then worked to make it sporty and full of technological innovation», explained Giorgio Maria Cassetta, the young architect and designer who is already making waves worldwide, and who created the external profile of the yacht, with her long, sloping bow. «Beefy, dynamic and at the same time extremely spacious: that was the challenge». In addition to the hull, even the propulsion system were created by the Dutch studio Mulder Design. 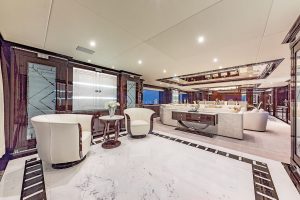 These are original designs too, with the addition of Total Ride Control, a stabilisation system previously used on fast ferries, but installed for the first time on a yacht of this size. It comprises two stabilisers at the bow and three blades tointerceptthe water at the stern, to control the pitch, while another two stabilisers in the centre control the roll. Basically, nothing has been left to chance. Instead, everything has been studied meticulously, and cutting-edge techniques applied to ensure the boat is a true gem.

Then again, John Staluppi, the Italo-American magnate and the “father” of Spectre, has always been a speed fiend, in the worlds of both cars and boats.
And three of his nine yachts were made in the Livorno-based shipyards of Benetti, the leading boat-building company in the world. A source of pride for Franco Fusignani, CEO of the firm that immediately after Spectre, launched three gigayachts, each over 100 meters long, one after the other in just 100 days.

These have been a very exciting few months for Benetti, one of the few shipyards in the world able to produce both giants like the gigayachts and custom superyachts like Spectre. As well as 250 employees, alongside  the 150 from the Viareggio shipyard, another 1400 people work every day at the 220,000 sqm facilities on the Livorno coast, involving a network of 450 different companies. 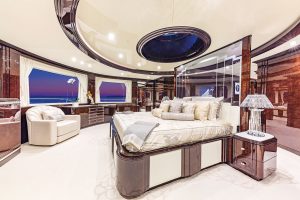 These are large numbers not just for a company, but also for the region and for the entire nation – the Benetti brand is taking Italy to the rest of the world. And Bentti Spectre is its queen. Simple and beautifully balanced, perfectly proportioned and as slender as a top model, but with the performance of a champion decathlete.

From the outside, you would never guess the large spaces she contains within, split over five decks. Her 1,200 m² of floor space houses large saloons, bars, the galley, two large refrigerators, cellars to hold a collection of fine wine, cabins for 12 guests, 25 bathrooms and a wellbeing area with a gym, hammam and massage room, plus the engine rooms and crew’s quarters. Walking on board Spectreis like finding yourself in a film. Lots of films, in fact.

The main deck is like a sort of déjà vufrom the golden age of the USA, with a style made popular by numerous reconstructions for the big screen. Benetti’s Interior Style Department drew inspiration from Florida-style art deco, along with hints of traditional late-nineteenth-century Parisian art nouveau. You wouldn’t be surprised to see Al Capone, puffing a cigar, emerge from the cylindrical, transparent lift set inside the spiral staircase of the main lobby. 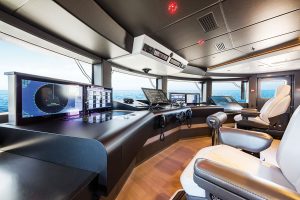 And the regal master cabin on the upper deck, with a round skylight in the ceiling and a semi-circular window overlooking the foredeck, recalls the set of some romantic getaway with Richard Gere: all you can see is an extremely secluded area with a Jacuzzi, a touch-and-go platform for the helicopter, always on hand, and the deep blue sea. Two levels down, on the lower deck, another film is underway.

This time we meet James Bond, pursued from the silent, steamy rooms of the Turkish baths to the large and noisy engine room, which is white, extremely modern and squeaky clean. And like any self-respecting escape scene, the star benefits from the large garage, where he can put either the nine- or the seven-metre tender to use, before disappearing over the horizon.

It may not have been cinematic fantasy that saw Spectretake first prize at the gala evening at the Capitol Kempinski Hotel in Singapore, but the Asia Boating Award 2019 title, in the Best Custom Built Yacht category, is already surely a formality. Like Seven Seas, Lady Moura and Madame Gu, Benetti Spectre is one of the gems sailing the seas. She’s also the most extreme One-Off in her family. And she’s Italian. Call her Lady.