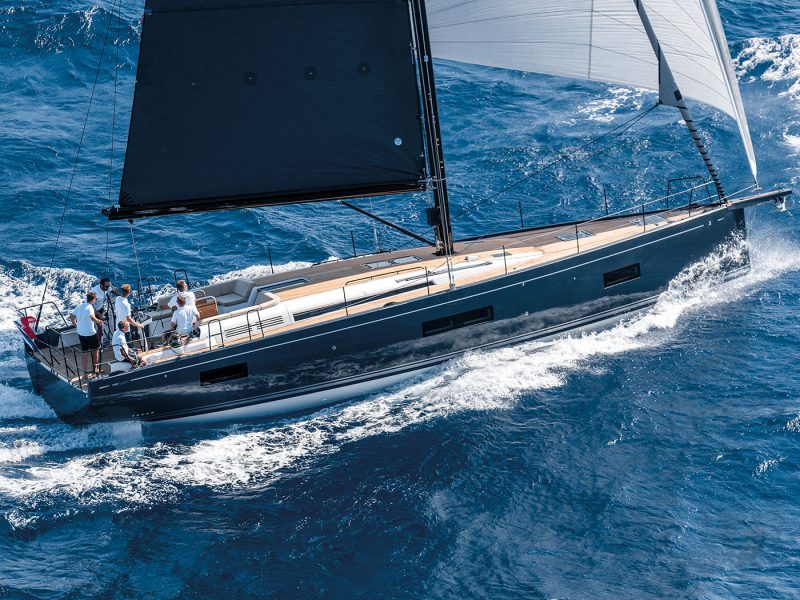 The French yard hadn’t made a boat like this for a long time. The design project is entirely Italian, with Biscontini doing the hull and Argento the interiors and deck

They may tell you that it isn’t actually that fast. They may say that when you add everything up, it is too expensive and the figures don’t work out for doing something like this, because around the world there aren’t that many potential owners prepared to buy a boat of this sort. None of the three statements is true, and I am going to explain why not. It is fast. And its detractors will just have to put up with that. At Port Ginesta, south of Barcelona, there was just a bit of breeze, which is what often happens there. The wind was at between five and seven knots. With the genoa up, the First 53 went at the wind speed, while with Code 0 it settled into a speed that was a knot faster than the wind. If that doesn’t seem very much to you, well it does to me. Not least because this is not a boat designed for racing.

It is officially in the cruiser/racer category but I think it is more of a boat for cruising than for racing. You can tell that from its width: a full five metres. Perhaps the largest beam in the category. At the dock it was moored alongside the Oceanis 62, a big cruising boat, one you that could hardly be more of a sailing cruiser. To give you an idea, you just have to remember that in the stern, underneath the chairs in the cockpit, there are actually two grills. If you look at the two boats from the stern and considering width rather than height, it doesn’t look so narrow. And I got confirmation of that by comparing the figures. Despite being two metres longer, the Oceanis 62 is only 33cm wider. And a boat with a beam like that is designed to be comfortable and easy to live on, and not just to go fast. Everything is fairly easy when you are under way. The boat finds its pace and doesn’t lose it. Even when the wind falls away, the First Yacht 53 doesn’t suddenly slow down.

Another characteristic that is again something that is typical of a sailing cruiser is that it doesn’t sail very close to the wind. If you were expecting to go very fast at 30 degrees, you would be mistaken. To make it go fast, the ideal angle sailing windward is 40 degrees. At least that was how it was in the breezy wind that we found. It was pleasant to sail, not just because of its performance and the ease of handling, but also because of some of the solutions used in setting up the deck.

The seats for the helm were excellent and felt as if there were actually three of them. But don’t be concerned, there is nothing too bulky – far from it, in fact the stern area is pretty clear. It is just that the system designed by Lorenzo Argento gives three positions on the same seat. The first is one that we could call the classic way, sitting to the side of the wheel. The second is the best while using the engine, because you can sit astride the seats as if you were riding a motorbike, and you have the helm in front of you. And finally, you can sit forward of the wheel, again on one side, with all the winches and rigging there to hand. That last position is perfect when you are sailing alone, or with a small crew. 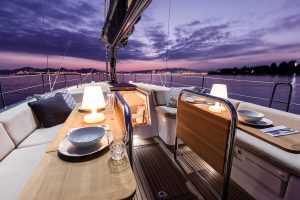 The cockpit generally feels good. Going aft there is a lot of room for the helmsman and whoever is handling the rigging. The sideways are also very wide. You can get around well on board, without having to be a tightrope walker. The sitting area, however, is a bit tighter. It is something of a trapezoid shape. To have a chat and enjoy people’s company, a tighter cockpit square is better. Having the split table is also a very good way of leaving a lot of room to get around without any trouble.

I also really liked the area below decks. I felt it was a good compromise between the design of a semi-customised boat and a production model. You get the feeling that there is a huge difference between the yard’s cruising models. And despite that, there is nothing shocking, and everything has been well done. Cleanness and simplicity are the watchwords here.

A brave choice and one that I found really convincing was not having the typical large dining table that seats ten. In any case, how often do ten people eat below decks? There is a dining table, and it is forward of the galley area and has got two parallel sofas. It seats six, which is actually the number of people that can stay on board, given that there are three cabins. And having a smaller table means you don’t block the central area of the dinette and can even have a second living area to starboard. 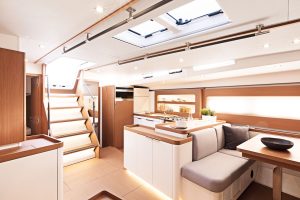 The only thing that didn’t convince me was the lack of a chart table. There is a technical panel, but there is absolutely spare surface area, and there isn’t even a chart plotter. The chart plotters are on deck, but when it is raining and you want to plot a route, maybe just before casting off, where do I go? Some people might say you should use a tablet, given that it can reproduce all the sailing and map data. But I believe that you need paper charts, especially if you are heading off on a cruise. Even if people no longer pull out a compass and set square and to plot a route on a “real” map, the chart table is the place where you can leave the keys to open up the tanks, the boat keys, your insurance, VHF licence, the harbour bill and a thousand and one other things.

So, the First Yacht 53 is indeed a cruiser/racer, but it looks more towards cruiser sailors than regatta participants. It shouldn’t alarm the competitors. This is not a boat that has been made to win over owners of other cruiser/racer brands, but rather to bring new ones to this kind of sailing. Thanks to the worldwide reach of the Bénéteau sales network, I reckon that over the next few years there will be more cruiser/racer owners than there are today. The First Yacht 53 doesn’t subtract, but it adds.