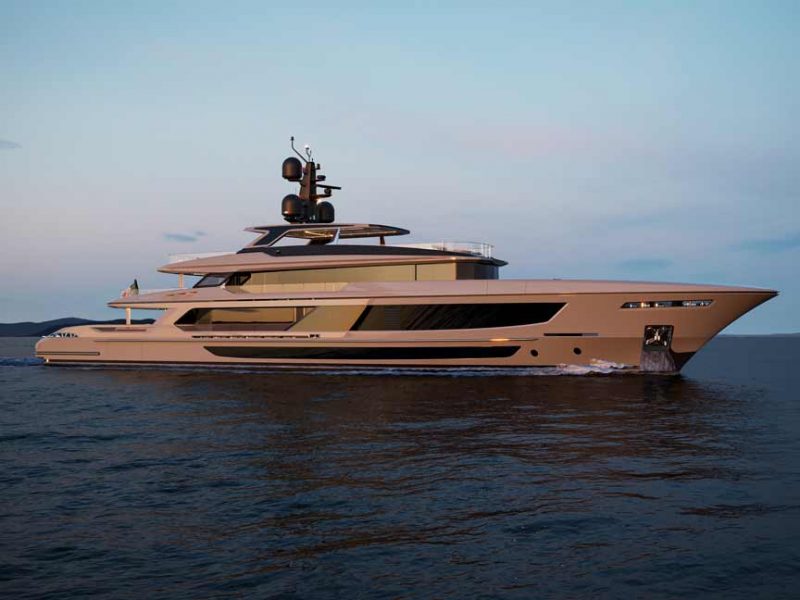 The traditional keel laying ceremony for the second model of the T52 took place at the Baglietto shipyard. Francesco Paszkowski Design signed both the exteriors and the interiors, the latter in collaboration with Margherita Casprini.

The T52 line of displacement motor yachts reinterprets Baglietto‘s classic lines in a modern, contemporary key. The hull features significant design innovations both at the bow and at the stern, the latter being open, with a beach club spread over three levels. The swimming pool can be “hidden” by a mobile up/down flooring system which extends the deck space when not in use. Inside, full-height saloon windows ensure constant contact with the sea.

New features include the new Beach Club and the SPA on the lower deck with its sauna and gym open to the sea through a side door. The sky lounge on the upper deck stands out, which can be opened on three sides, leaving the windows completely hidden. The Sun Deck takes up as much space as possible (as is traditional at Baglietto) with a length of almost 24 metres.

The yacht is equipped with two Caterpillar C32 engines that allow a maximum speed of 16 knots. Delivery scheduled for 2023.