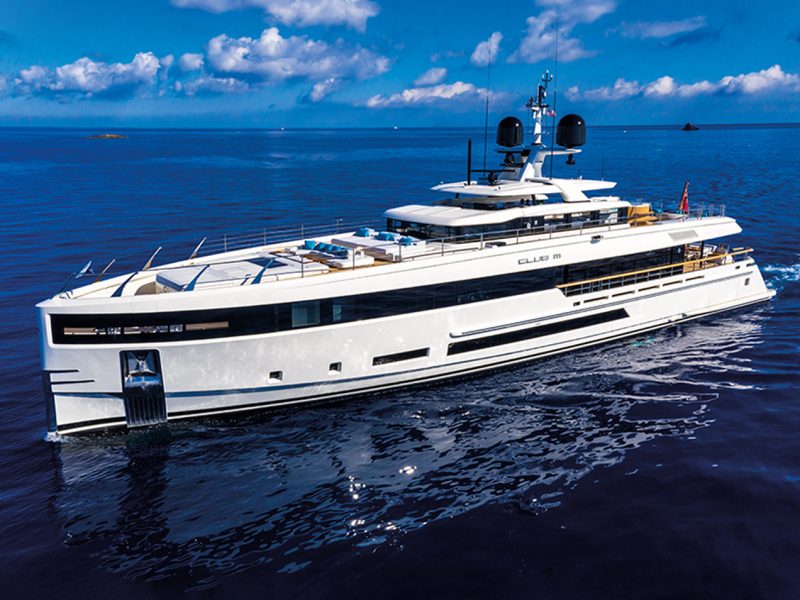 Club M is a yacht designed to meet the needs of an expert owner, who worked side by side with the designers and the shipyard to obtain the desired result

Just under 40 metres long, made entirely of aluminium and with a semi-displacement hull, Club M is – according to designer Horacio Bozzo and the managers at Baglietto – a mini megayacht. The design and build received the attention usually reserved for large yachts, in terms of the boat’s customisation, the level of design and engineering, and the quality of the equipment and finishes. 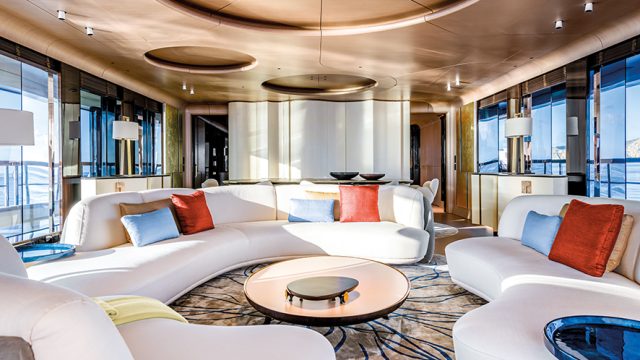 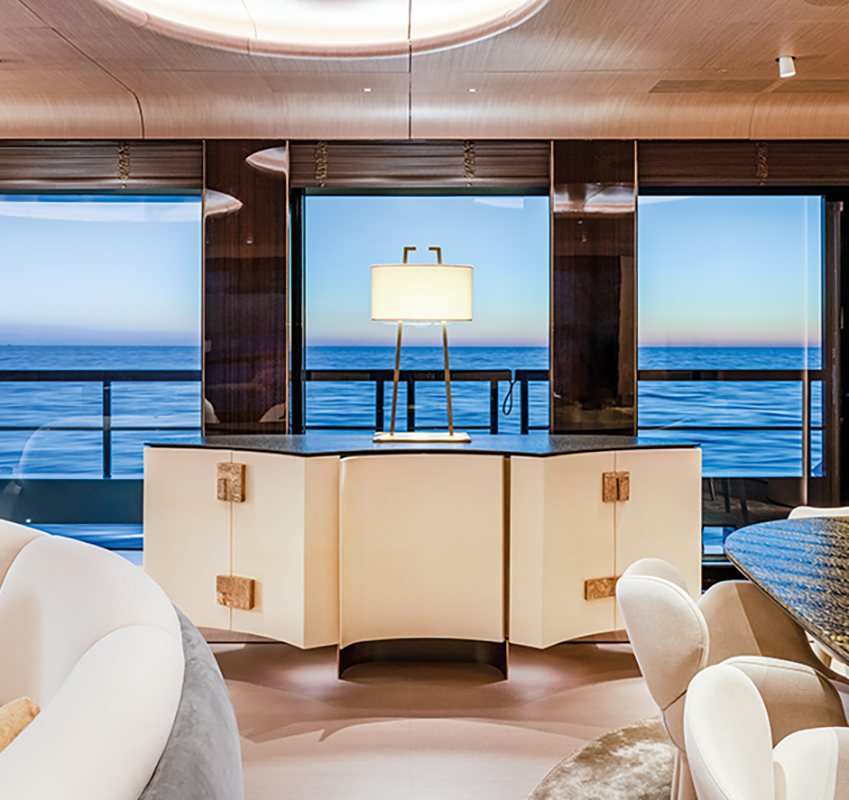 The interiors are intimate and sophisticated, matching the owners’ refined personality and style and satisfying their request for a warm and comfortable yet practical and harmonious environment, perfect for relaxing with their family and friends.

Club M’s owner has had several yachts over the past thirty years, but he has never had one fully custom-built, inch by inch, around his and his family’s needs. The previous boats were fine in certain respects, but fell short in others, like the appearance, functionality, technical characteristics or the quality of the finishes. It was time to move to a bespoke design. After around three years of research, the owner entrusted the exterior design to the Italo-Argentine designer Horacio Bozzo, who also helped to define the size the yacht would be. 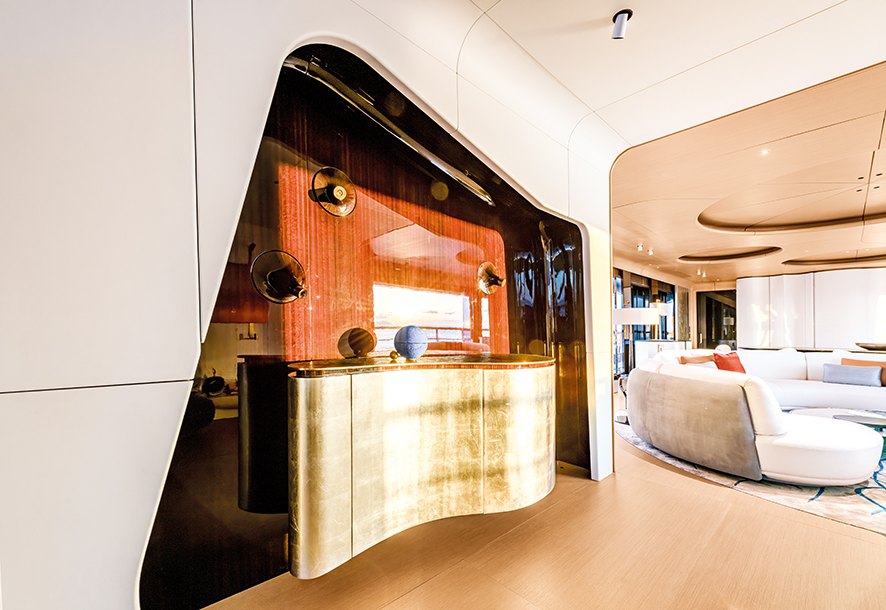 CLASSIC AND CONTEMPORARY STYLES BLEND SEAMLESSLY ON THIS BOAT WITH
A UNIQUE AND INIMITABLE FEEL. 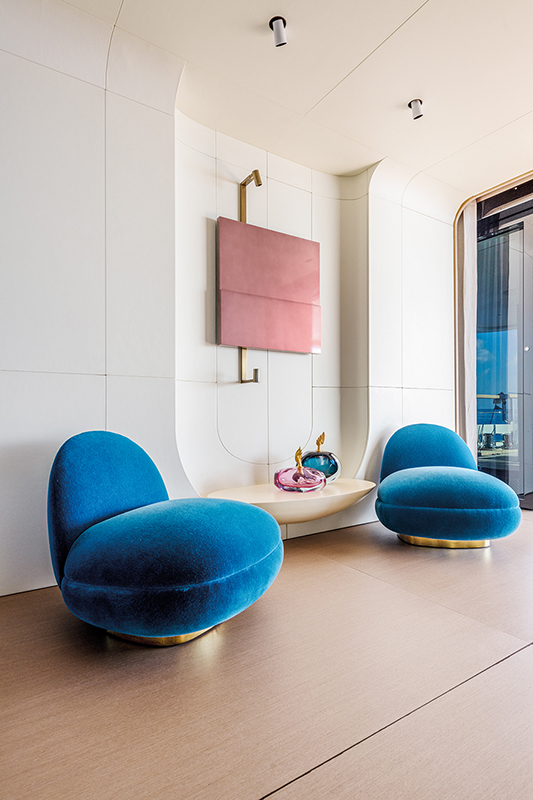 The design takes inspiration from the golden age of the space race, with walls and ceilings covered in a soft-touch, light-coloured leather, and expert use of contrasting materials, such as light bleached oak paired with dark eucalyptus details and natural oak floors that alternate with sections of handmade silk carpet.

The design suggested by Bozzo, with whom the owner immediately struck up a good relationship, distils all the comforts and features the owner requested into a boat with a total overall length of 40 m. There was a long list of requirements: a stylish, restrained and original exterior; a relatively small superstructure; a boat that could be used at any time of year; large outdoor spaces; plenty of natural light inside; a four- or five-person crew; a garage for a tender; excellent, but not excessive performances; peace and quiet on board; and fully customised interior design. Horacio Bozzo has created a yacht with an angular yet extremely elegant design, with a high, straight bow that rises to the upper deck, and long, unbroken windows on the main deck that add lightness to the boat’s good-looking, compact style. 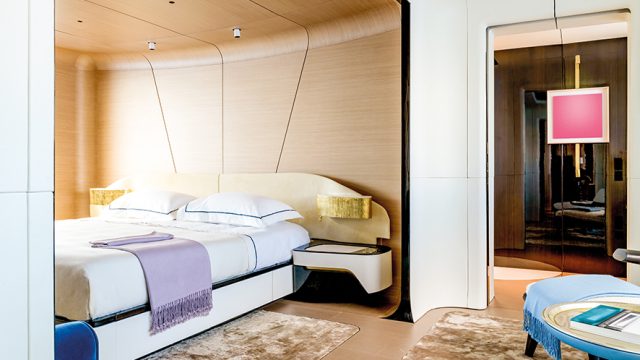 The full-beam master cabin includes an office with a panoramic view and a terrace. A complex dual-opening system has been developed to avoid disrupting the exterior design: the upper section opens upwards to allow fresh air in without compromising the privacy of the room, while the fold-down lower section creates a private terrace. 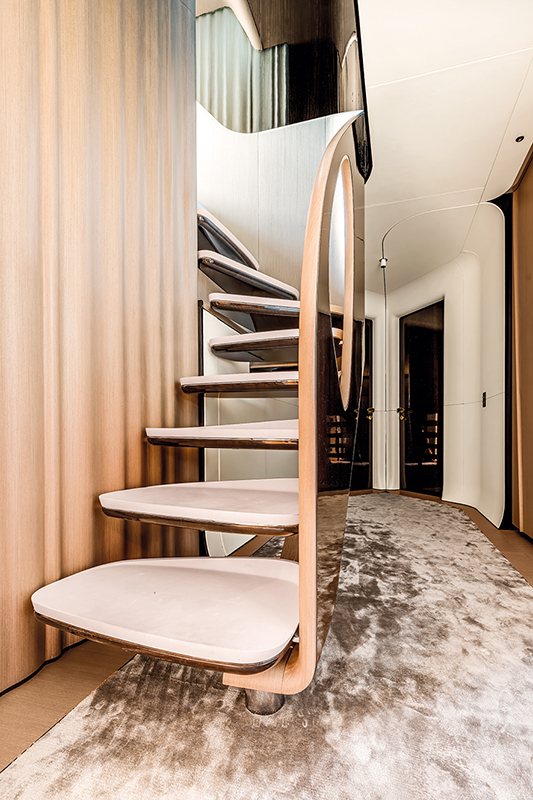 The yacht includes an array of functional elements that disappear into the structure of the yacht, keeping its design extremely uncluttered: a boarding ladder, a balcony in the owner’s suite, a ladder connecting the main and upper decks, and side wing stations for manoeuvring and a tender garage.

Another fascinating design solution can be seen on the upper deck, where a lounge area extends behind the helmsman’s station, protected by windows at the sides that can be opened individually and with a hard top cover: a large outdoor space that also provides shade and shelter from the wind when required. When seen in profile, it looks like Club M has three decks, not two plus a raised pilothouse. The entire upper deck is a large open-air space, running from bow to stern and equipped with all manner of luxuries for the owners and their guests. The spacious aft area features a small, custom-made pool, a sunbathing area and a bar, while very wide side walkways lead to another space at the bow, with a sundeck, sofas and coffee tables. A compartment below the sundeck provides space for jet skis and all other leisure equipment, keeping it all out of view. Speaking of hidden elements, the two outside piloting stations to the sides of the steering gear are mounted on pistons, coming into view only when they are in use.

Following the same principle of stylistic cleanliness, the main and upper decks can be connected externally via a ladder on the starboard side, approximately halfway down the side walkway, which vanishes into the superstructure when it is not needed. This ladder, made to measure by Sanguineti Chiavari, enables the crew to get around the boat easily, moving up and down without interfering with the guests’ activities. Another hidden element is the balcony in the owner’s cabin, in two parts: an upper section that opens upwards and a lower section that slides outwards like a drawer. In its resting position, it is almost impossible to identify it from the outside, and the right-hand side of the yacht looks identical to the left-hand side. The layout is a response to a specific request from the owner for a yacht that could be enjoyed in any weather conditions, with large open spaces, plenty of ventilation and natural light throughout the boat, without compromising functionality and retaining a sporty, sleek and stylish look. 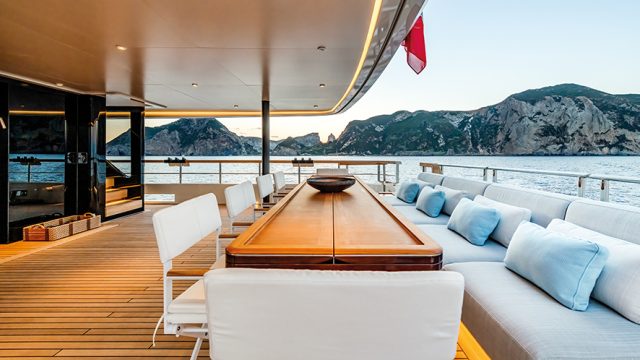 The central pilothouse behind the outdoor helmsman’s station provides a living area surrounded by windows that can be opened individually.

Aft of the lower deck, another large door opens on the port side, providing access to the tender garage. Inside there is a 3.4 m tender, moved using a crane integrated into the ceiling, and the yacht also tows an approximately 11-metre chase boat, a Fjord 36. As you might imagine, the shipowner also had very exacting ideas regarding the interior design. Entrusted to Achille Salvagni, they are every bit as sophisticated as the apparent linearity of the exterior, but while the lines outside are incredibly clear-cut, the interior design and furnishings are full of curves. Two worlds collide onboard Club M: the precision of Horacio Bozzo’s exteriors and the magic of Salvagni’s very characterful interiors. Highly original surfaces intentionally recall lunar craters in multiple locations, including the mobile bar, bathroom sinks and the saloon ceilings. CLUB M IS A REAL PEACEFUL HAVEN, WHERE EVERY SINGLE DETAIL, BOTH INDOORS AND OUTDOORS, REFLECTS THE WILL TO ENJOY AN UNFORGETTABLE, ONCE-IN-A-LIFETIME EXPERIENCE, AWAY FROM THE HUSTLE OF DAILY LIFE, WHILE PRESERVING FUNCTIONALITY AND FLEXIBILITY.

In all rooms, the glossy surfaces of dark eucalyptus timber are paired with bleached oak and embellished with bronze details. Some furniture has surfaces covered in parchment, a material that can adapt to even the most complex of shapes. The furniture, walls and ceilings have enveloping forms that steer clear of squareness and symmetry unless necessary. Salvagni designed all the furniture himself, to ensure their shape and size perfectly matched the yacht’s volumes and spaces. The fitting was done by Mobilart, a Pisan company that collaborated effectively with the designer and the boatbuilder. Turning to the layout, the main deck contains the saloon with a sitting and dining area, the galley, served by a large pantry and, forward, the owner’s apartment, comprising a bright office, cabin and a large bathroom. As well as large side windows, the cabin is also lit by windows in the ceiling. Guests are catered for with three very comfortable cabins on the lower deck: two VIPs and one twin. The fourth cabin has been fitted out as a gym, but it could easily be converted back into a cabin. The crew quarters, encompassing three cabins and a dinette, are also spacious. A sunbathing area with custom-made jacuzzi is located at the stern, where the mobile bar follows the lunar theme, which recurs like a leitmotif throughout the vessel. Technically, Club M’s performance and equipment are highly respectable. The hull, with a displacement when fully loaded of 280 t and a gross tonnage of 392 GT, has a top speed of 17.5 knots, driven by a pair of 1,193 kW Caterpillar C32 Acert engines. Its range is also impressive: at a cruising speed of 12 knots, it can sail for around 3,500 nautical miles. The owner requested a very quiet yacht, with noise levels of just 40 dBA inside. To achieve this, Baglietto worked on various insulating materials and devices to reduce vibrations and sound levels. Club M is undoubtedly a boat with outstanding design and executive quality, showing that size isn’t everything when it comes to building a yacht. The portholes were designed specifically to optimise the amount of natural light entering the cabins and for the perfect viewing angle between the inside and outside.

Engine room
Club M is a semi-displacement, aluminium boat, which can reach a maximum speed of roughly 18 knots thanks to two Cat C32 Acert D engines. They have extremely impressive acoustic properties, with a noise level of around 40 dBA.