Austin Parker 48 Sundeck, the lobster is BACK… 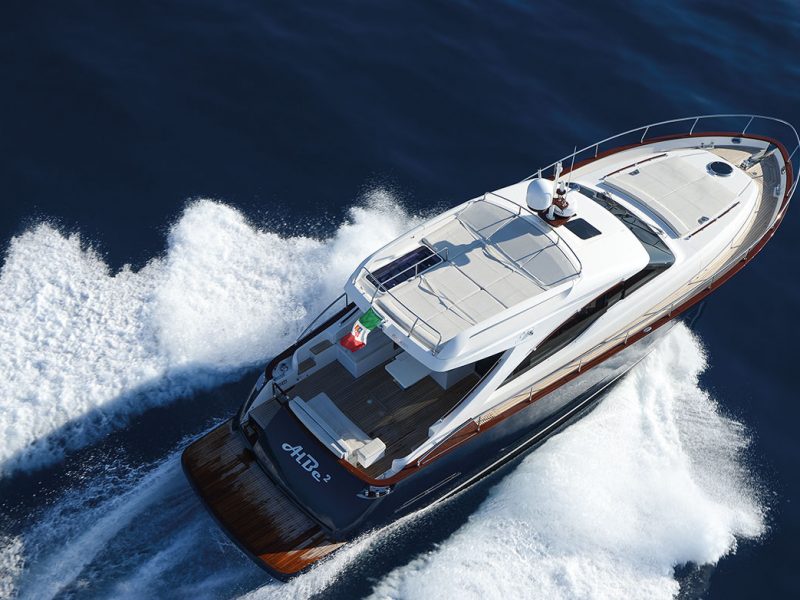 Austin Parker 48 Sundeck: a few small changes where needed: better use of space above and below deck and a hull which offers excellent performance in terms of speed, acceleration and fuel consumption. Design by Fulvio De Simoni

Many of them sought a safe place in which to hide away. After all, when the sea is stormy, it’s only sensible to keep out of harm’s way. And not all of them had the strength to venture out again. We’re talking not about lobsters, but rather lobster boats. After the difficulties they have faced in recent years, shipyards dedicated to building this particular type of craft have restarted production. 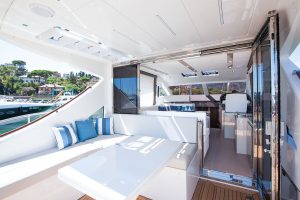 Austin Parker’s versions have always revealed expertise in interpreting tradition and reinventing themselves, and so it was only a matter of time before they made a return. The Italian shipyard has done it with the new 48 Sundeck, which, like all of Fulvio De Simoni’s designs, manages to combine tradition and innovation extremely successfully. So what’s new?

I liked the small fly-bridge, which can house guests and thus provides another outside area, without adding weight to the structure. Above deck there is everything you need, and nothing more. A second control console, for example, would have been superfluous. It’s true that you get a better view from above deck, especially when entering or leaving port, but given that the boat is only 15 metres long, you don’t mind there only being a single dashboard inside.

Moreover, a fly-bridge of this size allows the top to be opened, creating space for the dinette and letting in natural light. The interior has been laid out to make the most of the space. As well as the dashboard, the dinette houses a dinner table with a U-shaped sofa and another forward-facing linear sofa, near to the helmsman’s station. 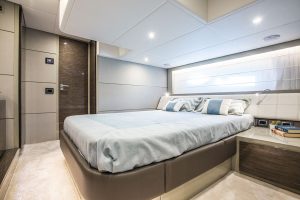 There is therefore a lot of sitting space both when navigating and at anchor. The galley is further down, practically in the passageway to the sleeping area. It is now further from the dining table, but has gained extra space. The bedroom area has three cabins and two heads.

At the bow there’s the VIP room and a cabin with bunk beds. The latter is a little short on space, but the berths are nonetheless plenty big enough. The owner cabin takes up the entire area at the centre of the boat, and offers plenty of floor space. The deck, including the living area on the fly-bridge, is split into a large sundeck that covers the entire deck house and a large area that can house a table and plenty of chairs.

What hasn’t changed is the performance, which was apparent when I tested the boat in the Gulf of Genoa. The sea was calm, but there is always heavy traffic around the breakwater, and there was no shortage of waves emanating from the wakes of cargo ships, ferries and cruise liners. The hull of the Austin Parker 48 Sundeck  performed just fine. The deep-V stempost allows you to cut through waves at any angle.

There is little rocking even when tackling a wake at top speed; the deck remains dry, and the windscreen stays free from spray. At most all you get is a small amount of fine misty water in the cockpit, from the edges of the boat’s own wake. Although the 550 hp Cummins inline engines are not renowned for their agility, the Austin Parker 48 Sundeck  doesn’t perform badly, and responds well when manoeuvring. 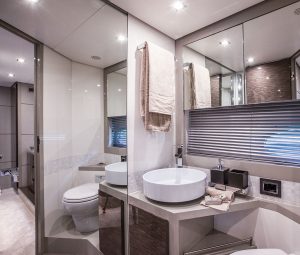 During steerage, the boat completes its turn well and the angle of the deadrise, open to the stern, ensures it always remains well glued to the water. The performance matches expectations for this type of boat. The range, from the gentlest gliding through to top speed, is huge, going from 12.5 knots to the over 28 knots we recorded at full throttle.

Austin Parker 48 Sundeck fuel consumption is excellent: surfing requires only 78 litres, while navigating at about 25 knots requires just over 150 litres. The lobster boat tradition is therefore being maintained, not just thanks to the lines of the exterior and the family feeling that this boat has inherited from its predecessors, but because the hull behaves well and the performance, both in terms of speed and fuel consumption, is more than satisfactory.

The only thing that didn’t fully convince me was the visibility. When seated the view is perfect, but when standing the windscreen is a little too low, forcing me to duck down every time I wanted to see clearly what was in front of me.

In conclusion, while the Austin Parker 48 Sundeck is the first lobster to stick its antennae out of its hidey-hole after the storm, it will soon be followed by others: a new 44 will replace the ‘old’ 42, followed by a 35 and, next year, a 74-foot version.

(Austin Parker 48 Sundeck, the lobster is BACK… – Barchemagazine.com – February 2018)