Absolute 62 Fly, Strength based on experience 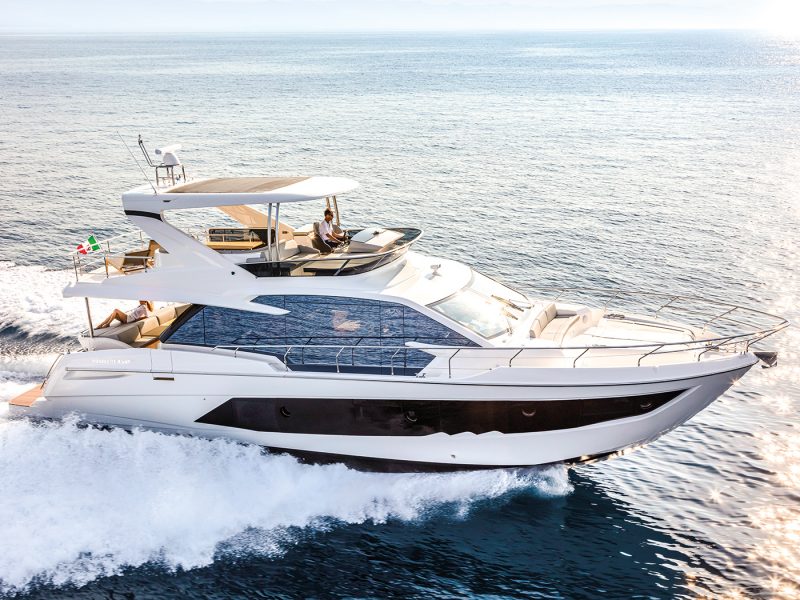 There is a lot of space on board, at the helm it feels light and pleasant, and the set-up is very functional. The new 18-metre boat from the Podenzano-based yard is a Mediterranean cruiser with many qualities

Implacable, like clockwork. Over the past few years, the Absolute yards have been continually bringing new boats to market. There are four ranges: Fly, Navetta, Sport yacht and Sport line, ranging from 45 to 73 feet, and inside they really have got everything. There are no gaps in the range that accompanies an owner in choosing a boat from 14 to 24 metres, the length at which it becomes a pleasure yacht.

When one of the models starts to get too old, it is immediately restyled, or replaced. That is possible because of the yard’s ability to plan long term, and because of its modern production facility, which is constantly improving and growing. The Fly 62 has joined this process, and will gradually take the place of the 60, which was launched in 2015. The Fly 62 is a boat that like the previous version fully embraces the concept of the perfect craft for holidays: with large volumes, a big flybridge that extends in the stern right to the taffrail, and a fully IPS engine system. But it has changed a lot in terms of looks, both outside and – especially – inside.

The exterior design is more modern, in line with the changes that have been made to all the recent output from the Podenzano facilities: the black band along the side of the boat extends further, hiding portholes and windows, with the same stylistic element as on the lower section of the new 47 and 58; the window area has been increased, including on the sides of the superstructure with the fibreglass inserts noticeably less visible, thus leading to brighter interiors. And finally, there is new use of LED lighting in the ceilings, which continue from the cockpit to the lounge, a detail that gives the boat a new identity. 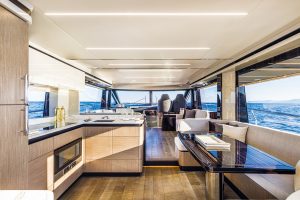 The distribution of the areas on the main deck has entirely changed, with the kitchen moved from the midships area to the stern, and looking onto the cockpit, from which it is only separated by a medium-height bar counter. It is an arrangement that at one time was only found on American-built yachts, but is now increasingly common. The advantage isn’t just in terms of usage. In practice, the kitchen is nearly always the focus of life on board boats of this size, but, in this case, it also creates a very nice feeling of continuity between inside and out, effectively turning it into a single room. Precisely to increase this feeling, the yard has created a separation with an electrically-operated window, both above the section with the bar counter looking towards the cockpit, and also above the part that opens onto the lounge.

And from bow to stern, the Absolute Fly 62 really has many features that make life on board, and steering, easier. Worth pointing out, in no particular order are: the electricity control cabinet, located next to the stairs that lead to the lower deck is large and easily seen, but not aesthetically invasive; next to the steering position there is a door that gives direct access to the gangways, a great help for onboard passenger traffic and communications during manoeuvres; then there is the option of installing a third docking position in the cockpit, with a joystick and control of the bow thruster; the submergible stern bathing platform, with integrated ladder and steps in teak, is also very nice, and has a big yacht feel to it. 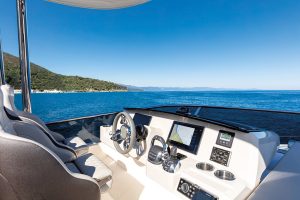 Testing at sea once again showed how the coupling of the hulls made by the Podenzano-based firm and the Swedish engines works very well. In this case the curve showing litres of fuel used per nautical mile is interestingly flat at the top end. That means that once the boat is planing, at around 13 knots, you are always moving very efficiently. Fuel consumption consistently comes in at under nine litres per mile.

So essentially the boat doesn’t ever use a lot of fuel, but then it just depends how fast you want to get where you are going. And if you are in a real rush, you can open the throttle right up and fairly easily do over 32 knots, which is what we did during our test – despite the fact that it was fully loaded, both with liquid and with crew, and there were a few waves.

Finally, a word of praise for the feeling at the helm. The shared experience between Absolute and Volvo Penta has enabled them to find a near-perfect balance between handling and safety, and between agility and the certainty that you won’t be doing turns with excessive heeling. And even when we did a series of “S” turns at full revs, we hardly lost any speed. This 18-metre, 34-tonne boat with a large hard top, moves around the sea with surprising elegance.